MSC began by producing and piloting case studies in classrooms around the University of Michigan campus. One early adopter, Professor Jeremiah Johnson at the School of Natural Resources and Environment, developed two of MSC’s first case studies with students from his class. The narrative that follows describes the learning and assessment that took place with those cases, as Professor Johnson attempts to answer the question “Can student work promote classroom learning for other students and contribute to faculty scholarship?”

Professor Jeremiah Johnson clicked “Save” on the syllabus for his Winter 2016 class, NRE 615: Renewable Electricity and the Grid. He hesitated a moment before closing the document, reflecting on the adjustments he had just made to the course. As with most faculty, the bread and butter of his courses was lectures. Lately, though, he had begun to feel dissatisfied with relying so heavily on this one teaching method. The problem with lectures, as he saw it, was that it encouraged far too much passivity among students. What he really wanted was for them to be engaged in the learning process, to take a more active role in both acquiring and creating knowledge. He wasn’t entirely sure how to do this, but he had just signed his name onto a proposal for the Transforming Learning for a Third Century (TLTC) initiative in which the faculty of the school were throwing their weight behind an effort to create case studies for sustainability education. The initiators of the proposal had chosen case studies because they have been shown to enhance student learning (Srinivasan et al., 2007; Herreid, 2011). In the spirit of the proposal, Professor Johnson planned to have his students create their own case studies as the major project for the course. Running such experiments in the classroom was always risky, he knew. Would the students understand the assignment and be able to deliver suitably high-quality work? Would the assignment enhance their learning and motivate them to be more active learners? Or, would their distaste for the assignment result in poor course evaluations for him? And lastly, could he use the students’ case studies in future semesters to promote classroom learning while contributing to his own scholarship?

It was April, and the end of the academic year was finally near. Professor Johnson settled into a rotating seat in the auditorium-style classroom, pen and rubric in hand. This week, the students were giving presentations about the case studies they had been working on all semester. Based on the written work the students had turned in, they had risen to the occasion with some truly excellent case studies. Several representatives from MSC had also joined class to scout for the best ideas to potentially fund and develop into complete, multimedia-enriched cases. Professor Johnson knew which groups he would recommend, and he was curious to see if the MSC representatives agreed with him. Later that month, Professor Johnson found himself in MSC’s first curricular advisors meeting, reviewing proposals with other faculty from around campus. The room buzzed with excited energy as the advisors sorted the proposals by theme, location, and competencies addressed, seeking diversity for a future case library. By the end of the two-hour meeting, 27 proposals had been accepted and would become the very first MSCs, including two proposals from his students in NRE 615. Professor Johnson was especially interested in these case studies because they fit well into his existing syllabus, and he could use them to teach future students. And, having the students write the case studies based on their classroom work seemed to be an efficient way of creating new teaching materials. He hoped the student case authors would get as much out of the process as he was getting in new teaching materials. He thought they would, based on what he knew about the research on the benefits of project-based learning (Wiek et al., 2014).

Summer came and went far too quickly. The student case authors had put in a lot of work over the past few months to transform their classroom assignments into complete case studies. One of the case studies, “Distributed Energy Storage” (Kraus et al., 2016), about an innovative partnership between Tesla and a small electric utility in Vermont called Green Mountain Power, was slightly further along in the production process and would likely finish soon. The team had worked especially quickly given that they had chosen to do the majority of the podcast production themselves. Most teams that Professor Johnson knew of worked with MSC to conceptualize the podcast and conduct interviews, and MSC provided the production and engineering. One of the student case authors, Andrea Kraus, had some experience in audio production, and she was using this opportunity to flex and strengthen her media muscles. The podcast was shaping up to be an excellent addition to the case study, both as a complementary mode of learning (Serva & Fuller, 2004) and as a connection to the practitioner for the case, Josh Castonguay of Green Mountain Power. Mr. Castonguay had been able to provide an insider’s perspective on the partnership Green Mountain Power had undertaken, and as a result the case study linked theory to practice in a way that a textbook could not. Professor Johnson had high hopes for the positive impact the case would have on his teaching when he piloted it next Winter term. However, he still had to decide how to assess the impact of the case on the students’ learning. How could he get useful feedback in a way that would also help build his own scholarly portfolio?

Resolution: In January 2017, Professor Johnson launched “Distributed Energy Storage” in NRE 615 by giving his students a quiz. He had a keen interest in assessing the case, or, in other words, finding out whether using the case study produced positive student learning outcomes. Although MSC was rapidly developing its own set of assessment tools for its cases, Professor Johnson had a solid idea of the approach he wanted to take, so he had ventured out on his own and was now passing out content-related questions about the case. The students would see these same questions on the final exam in April, and he planned to compare scores between the two tests. Professor Johnson was also looking forward to the annual meeting for the Association of Environmental Engineering and Science Professors (AEESP) that, conveniently, would be held in Ann Arbor in June. He was already preparing his abstract, certain that his results would interest other environmental engineering professors looking to improve their own teaching.

At the conference that summer, a sizable crowd gathered to hear Professor Johnson’s talk about his experience using “Distributed Energy Storage.” Although many of the audience members were passionate about teaching, he was unsure how many were using case studies. He knew that case studies, although they had some research supporting their efficacy (e.g., Anderson et al., 2017; Dochy et al., 2003; Dori et al., 2003), were not universally loved. Many instructors believed that case studies were an inferior method of teaching course-related content, for example. Often, appropriate case studies were unavailable, requiring an instructor to create his or her own case study from the ground up, which consumed precious time. Faculty were also used to lecturing and often not trained in facilitating the kinds of classroom discussions associated with case studies (https://www.hbs.edu/teaching/case-method/Pages/default.aspx). MSC aimed to overcome some of these barriers with its case library and teaching workshops, but changing habits and minds would take time.

Professor Johnson’s assessment results were encouraging: Most students showed improvement from pre- to post-test, including international and first-generation college students. His class comprised students primarily from three different schools: Engineering, Business, and SEAS. Interestingly, the Engineering students showed the largest score gains, followed by the SEAS and Business students (Figure 1). Overall, Professor Johnson told the audience, he had observed great value in having students write a teaching case. He also found that supplementing lectures with cases helped to tie disparate concepts together for the students.

The audience clapped enthusiastically after Professor Johnson concluded his presentation. A barrage of questions followed, so many that the moderator had to end the discussion to let the next speaker take the podium. Professor Johnson returned to his seat, beaming. He wasn’t sure how many converts to case-based teaching he had made, but he suspected it was at least a few. The case studies had, in the end, been a successful experiment in co-production, and he intended to use the student-produced material in his class for a long time to come. 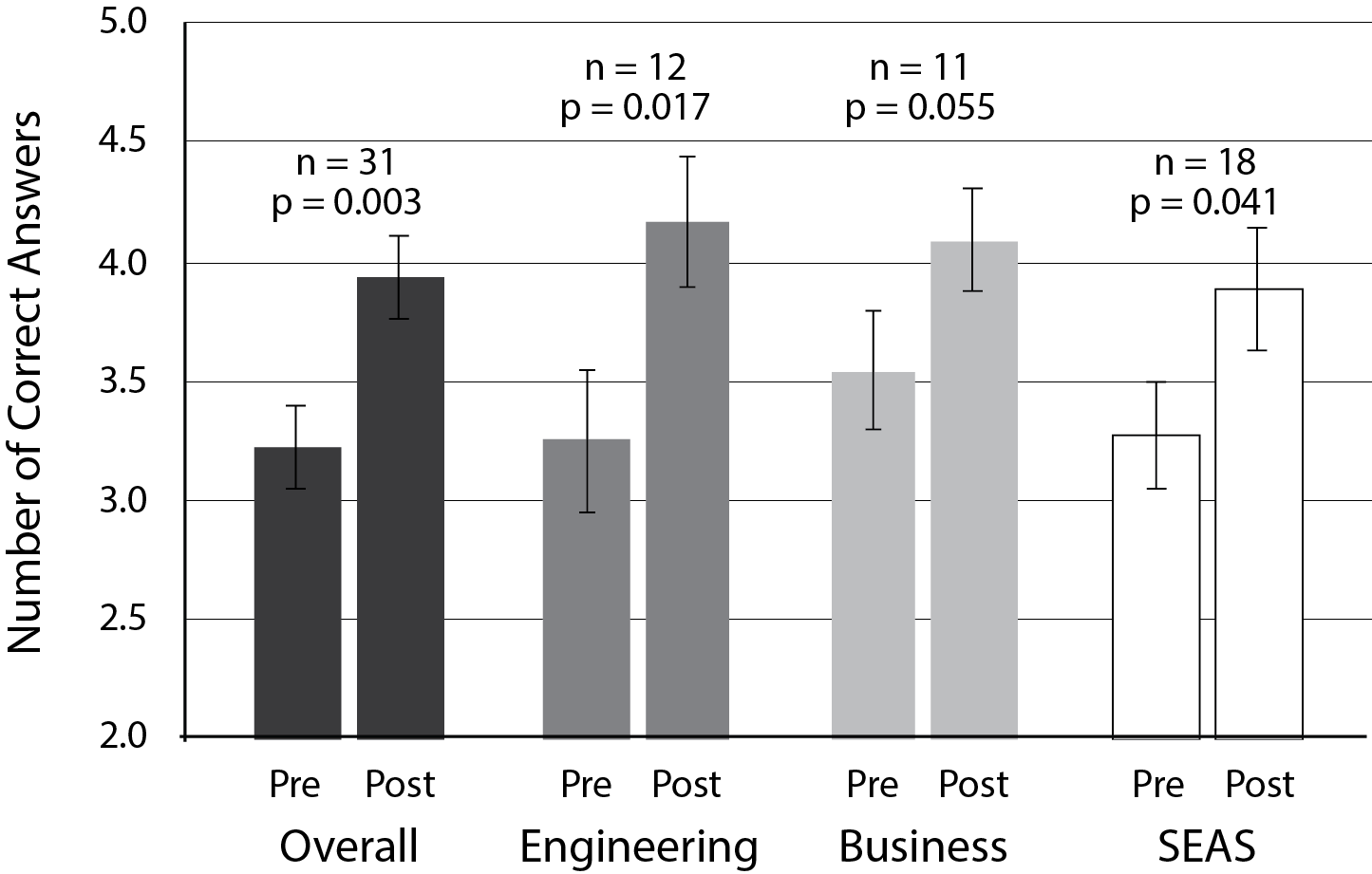 Figure 1. Average number of questions answered correctly by students on the pre- and post-tests, out of a maximum of five. Error bars show the standard error. Three questions covered material from “Distributed Energy Storage,” and two covered material from an additional case study used in the class, “A Radioactive Decision” (Szczepanik et al., 2017). Dual-degree students were counted in both of their programs. Data are credited to Jeremiah Johnson. At the time of data collection, the School for Environment and Sustainability (SEAS) was known as the School of Natural Resources and Environment (SNRE), though the label SEAS is retained in this figure for simplicity.